Microsoft's Age of Empires was a game I fondly remember playing as a kid. It was released in 1997, however, I didn't play the game until 1998 when my dad bought us our first family computer that year.

Basically, the game is about building up an empire. You select workers to gather up gold, stone, wood, and food. As your economy increases, the more you can afford to add more villagers or military soldiers. You start off in the stone age but can upgrade different ages until you reach iron age. With the Expansion pack, you explore the Roman Empire era.

In 1999, I would later play Age Of Empires II: The Age Of Kings at a friend's house and later in 2000, would receive the game for my birthday. That game is essentially the same gameplay except better graphics and villagers now include women. The game also moved passed the fall of the Roman Empire and focused on the Medieval age.

Sometime in the mid or later 2000s, I bought Age Of Empires III, For some reason, I just never really got into that game. I can't even really talk about it. I still have it...maybe I should give it a try.

Last year in 2017, the original Age of Empires got a big modern makeover with 4K graphics and a new soundtrack to celebrate the game's 20th anniversary. For more info on the Age Of Empires game series, check out www.ageofempires.com 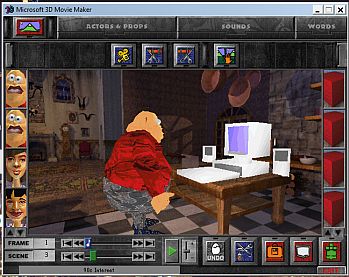 Another great game I fondly remember playing is 3D Movie Maker by Microsoft Kids. The game was released in 1995, but I didn't get the game until 1999. A friend of our family had given it to me.

In this game/program, you are basically a director of your own little 3D movie. You have a few sets to play with as well as different angles within that set. You have actors, props (which can come in handy! See how I built that 90s computer using just block and letter props?) You have word boxes to tell the story or to represent dialogue. It also has sound so you can add sound FX already within the game, dialogue, or record your own dialogue. It also had MIDI music that you can add to give your movie a soundtrack.

When you are not making a movie, you can watch a pre made movie from the creators, or watch your own movie. You can also browse within the movie theater. The Microsoft Kids' mascot McZee was there to help you along the way, along with a character named Melanie. Part of the game too was to find the actors resume portfolios that were hidden through out the theater. I have never found all of them...Hmm...now that I think about it, I wonder what happens if I had collected them all?

My buddy Jason and I used to play this game a lot. It provided a lot of entertainment for us . We would also go on the internet during dial up days and download movies...boy did that take some time! 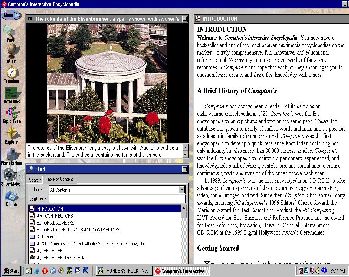 Awe...before the days of Wikipedia, people used CD Rom Encyclopedia's like Microsoft's Encarta or this one - Compton's Interactive Enclyopedia. This is the 1997 edition. The same friend of our family that gave me the 3D Movie Maker game, gave me this one too. I remember spending hours on this software. This is what I had before our family had the internet. It's got a Menu, a section for atlas, timeline, infolinks (If you had interenet service),topic tree, a cool Explore function that took you into different picture enviroments like "Grandma's Attack, Madcap Music" and many more. In those sections, you just click on items and some sort of mulitmedia thing will pop up - like a picture and sound describing what you had touched. I used to spend a lot of time just searching under music and listening to the MIDI files,musical sound clips from around the world and instrument sound clips. I enjoyed this program. I don't think physical Enclcyopedia software is being made anymore. It just isn't the same experience with Wikipedia